Shakespeare Rant - To Teach or not to Teach? 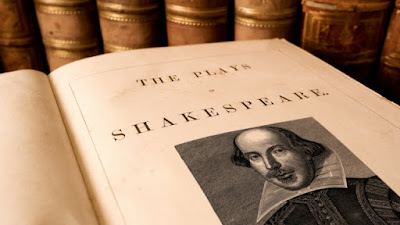 Okay let me preface this by saying, I’m not trying to force my opinion on anyone and I understand if people just simply don’t like Shakespeare, that’s fine by me, obviously people can have their own opinion and I respect that. This rant is based on a few articles I’ve recently read and a general thought that I’ve seen going around lately; should Shakespeare be taught in the classroom?

Shakespeare is one of my favourite writers in both poetry and plays alike; I believe that all his works are timeless masterpieces. His work includes enduring themes in the arts such as Love, Betrayal, Death (a large amount of that) and his work was extremely revolutionary for his time also dealing with issues such as Racism and Gender fluidity. These themes are obviously still relevant today completely disregarding the argument that “Shakespeare is outdated” or “His works are no longer relevant to modern day”.

Furthermore, if Shakespeare shouldn’t be taught in school, neither should history as the Bard is a vital part of the development of the English Language and plenty of modern works are based on Shakespeare’s classics. Let’s list a few for example.

·         West Side Story (1961) – Based on Romeo and Juliet. Star-crossed lovers (Tony and Maria) meet in opposite sides of a racial gang feud in 1950s New York, obviously ending in tragic fashion.

·         10 Things I Hate About You (1999) – This is pretty much a very close adaptation of Shakespearean comedy The Taming of the Shrew especially with the plot of an unpleasant girl being ‘tamed’ by her love and is often referred to as one of the greatest movies of the 90s.

·         She’s the Man (2006) – Another comedy adaptation, this time of Twelfth Night, where a girl disguises herself as her own (fake) twin brother to join the football team but then falls in love with a guy who is in love with her female self.

·         The Lion King (1994) – Yep, even Disney took inspiration from good ole Will. The story of Simba’s rise to power came from Hamlet. Simba is Hamlet realising his uncle (Scar) killed his father (Mufasa) to take the throne. Timon and Pumba is Rosencrantz and Guildenstern and Nala is Ophelia. There’s even a ghost sequence in Disney’s classic.

·         The Lion King II: Simba’s Pride (1998) – Again, Yep. Disney took inspiration from good ole Will for the sequel too. This one’s Romeo and Juliet; Simba’s daughter falls in love with a lion from Scar’s pride and they must overcome their families anger toward each other to be together. However, there’s less violence in this.

Okay so right there are only a few examples of modern-day adaptations of Shakespeare in the arts. Even if you don’t like those films or adaptations, you must recognise that Shakespeare can’t be as outdated and non-relevant as it first seemed. Additionally, even the classical plays have been shown to become modernised.

The Royal Shakespeare Company has been modernising many plays to keep them suitable for a younger audience and a modern generation. This includes plays such as Hamlet (using guns and set in present day), Macbeth (starring Christopher Eccleston and once again set in present day), Romeo and Juliet (contemporary production based on generation of young people), Titus Andronicus (based in 2017 using the current political landscape as inspiration) and Othello (using a modern-day military operation as a background). With Shakespeare being used in this contemporary fashion, the thought again that Will’s works are not use-able in today’s schooling system is absurd because it’s clearly able to relate to.

Another argument about Shakespeare not being taught in schools, is that it’s language is too difficult because it’s all in ‘Old English’ and therefore difficult to read. I will admit, I understand this criticism more than others due to my own difficulty understanding the writing at first. However, once this language barrier is overcome, the writing is so profound, how is it possible someone could say this is really a problem? Arguably, his most famous quote “To be or not to be” sounds complicated at first look but after an understanding of the meaning, it’s incredibly important as an understanding of humanity, and gaining this understanding at the youngest possible age is incredibly essential especially with our younger generation with the development of social media and video games.

I could go on and on about the importance of Shakespeare both generally for anyone to learn and in the classroom specifically. The main point I’m trying to convey however is that, William Shakespeare was a visionary that was so far past his time with his writing on homosexuality, racism and gender fluidity. With these issues being in the spotlight more than ever today, Shakespeare’s writing is arguably more influential and relevant now than when it was originally written, therefore meaning it is absurd to say it shouldn’t be taught in school as it can obviously related to by today’s and even future generations.

Popular posts from this blog

Does Hamlet's success as a tragic hero stem from his theatrical creativity, and does Hamm's lack of success correspondingly arise from his insistence on theatrical staleness/repetition?

April 25, 2018
The definition of a traditional ‘tragic hero’ originated in Aristotle’s work ‘Poetics’ where he suggests that a hero of a tragedy must evoke a sense of dread from the audience due to their own misfortune; a sense of catharsis, purging the emotions of an audience through art (Merriam-Webster's encyclopaedia of literature, 1995). The change of said fortune "should be not from bad to good, but, reversely, from good to bad.” (Butcher, Aristotle. and Aristotle., 1902) From this formula therefore, Shakespeare’s Hamlet is essentially the perfect tragic hero in the sense that he begins the play with the just intentions of avenging his father’s death using his own theatrical creativity, but by the end of the play where he decides to finally commit suicide after all the deeds he has done. This contrasts with the character Hamm from ‘Endgame’ who tries to become a tragic hero much like Hamlet yet fails in this plan as he cannot evoke the same catharsis as Hamlet can, arguably because of…
Read more

January 04, 2018
A mixture of crimson with an earthy hue formed into neat puddles inside almost artistic cracks throughout the land. Each small carving was slowly swallowed up by the rainfall that curses these parts constantly; however, this only seemed to dilute the blend spreading it further along the lonesome footpath. The eclipsed sky was bursting with an abundance of spotted lights drifting endlessly without aim or consequence. Between these little pockets of purity, nothing seemed to matter. There were no alliances that needed to be kept, no friendships begging to be respected, and with no difference seen between the souls of the wicked and that of the divine. The full moon shone new light over what had previously been hidden, and creatures darted from one miniature piece of woodland to the next, seeking shelter from the unforgiving storm. Kind animals hopped from one natural umbrella to another managing to hide their innocence and majesty. This small snapshot of the world reminded him more of t…
Read more

Visit profile
J/18/Bristol
Here you'll find a how-to guide on how to fail at being me. I'm an actor, singer and am generally in love with anything theatre-related!
Follow my joint YouTube account 'Jollie' for some 'high-quality' covers
Follow